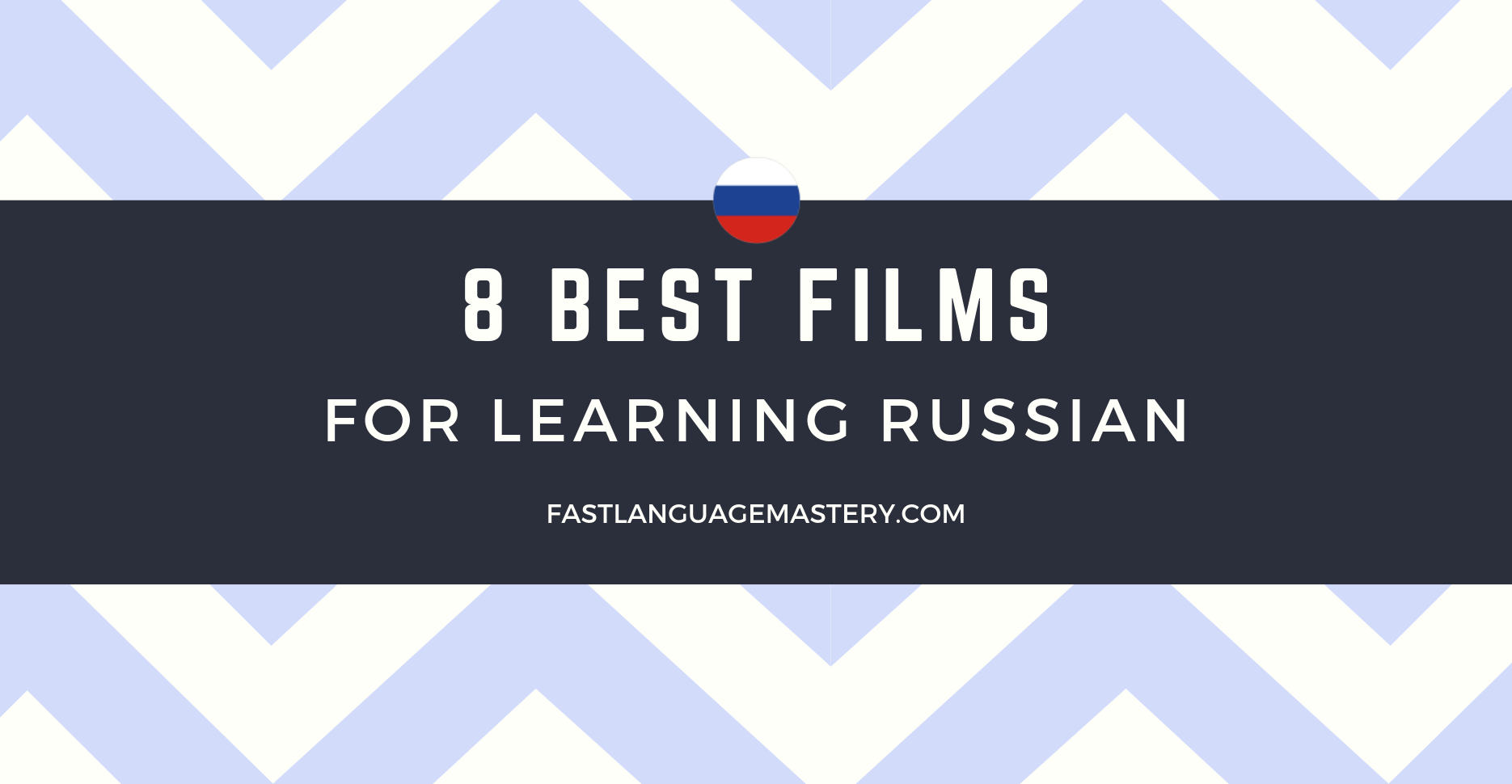 This is a collection of 8 the best films for learning the Russian language. Each of these movies is very famous and interesting, and they have great soundtracks. These actors are legends of Russian / Soviet film industry, and their pronunciation of Russian words will not make you confused about what they are talking about.

If your level of Russian is not high yet, read detailed descriptions below in order to understand what these films are about. I don’t recommend to use English subtitles, because if you do – you will read them and ignore Russian speech.

This is the most famous Soviet/Russian movie, 99% of people in Russia and former Soviet republics have watched it and more than one time. This is a cult movie from with simple language, interesting and funny plot. Some phrases from this movie became idioms, and the actor Alexander Demyanenko in the role of Shurik became is the most famous actor.

This movie consists of 3 not long films about Shurik and his adventures:

The first film is about a bully who arranged a fighting in bus and was punished by 15 days of forced work in construction. There he meets Shurik and has to work with him. Then the comedy begins…

The phrase “Надо, Федя, надо!” that means something like “you don’t want, but you must” became an idiom in Russian language.

The second film is a funny story about nerd students. Shurik is preparing for exam and reads a textbook, then he follows a beautiful nerd girl with a conspectus of lectures on autopilot, while they both are studying so hard that don’t even see each other… Then after exam he dates this girl, and they don’t even know that they were both learning the conspectus by rote at her home…


The third film is actually called the Operation “Ы”. The chief of the warehouse hires three rogues to stage a fake robbery of the warehouse in order to help him avoid revision. They call this operation “Ы”. But instead of the old babushka – security guard, asked Shurik to replace her in that night… In this film, apart from Shurik, there are 3 other most famous Russian actors – Yury Nikulin, Georgy Vitsin, Evgeny Morgunov in roles of the rogues.

Another story about Shurik, and another the most famous Russian/Soviet movie. In this full-lenght film Shurik travels to Caucasus as a folklorist to learn about local traditions and customs. He meets the girl Nina who came there for vacations to her uncle.

The man with lastname Saachov wants to marry Nina and reachs an agreement with her uncle to buy Nina for 20 sheeps and some other stuff. While Shurik is looking for local traditions, Saachov and Nina’s uncle conspire to show him performance of old local custom “Bride kidnapping”, however it was not a performance but a real bride kidnapping. They hire three rogues in roles of Yury Nikulin, Georgy Vitsin, Evgeny Morgunov (same as in operation “Ы”) to complete this task.

The phrase “(Нина) просила, чтобы это сделали именно вы” – “(Nina) asked, that it must be done precisely by you” (change Nina to any other name or a pronoun) became an idiom in Russian language.

One more comedy story about Shurik. The film begins as black and white. Shurik is an inventor and tries to invent a time machine. He turns it on, it explodes, electricity breaks and Shurik falls, hits head and loses mind. And the colorful vision begins…

The Shurik’s wife comes to his flat and says that leaves him. Then the thief George Miloslavskiy pernetrates to Shurik’s neighbor flat and robs it. And Shurik shows the time machine to the house manager Ivan Vasilievich, twin of the tzar Ivan the Terrible. He turns on the machine and the wall between his and neighbor’s flat disappears and they see thief Miloslavsky, and he comes to Shurik’s flat getting interested in the device. Then Shurik increases the power and the through the wall the Tzar’s palace of 16th century opens, and they see the tzar Ivan the Terrible. Suddenly one warrior-security throw a speak to the time machine, it gets broken, and Miloslavsky with Ivan Vasilievich leave in 16th century, and Shurik with the Tzar in the current time…

Also one of the most famous Soviet/Russian films ever. In the main roles of Yury Nikulin and Andrei Mironov.

Contrabandists traffic illegal diamonds from abroad. The member of the gang of contrabandists Gennady/Gesha(actor – Andrei Mironov) goes to cruise to Istanbul to get a party of valuable diamonds and meets the tourist Semyon (actor – Yury Nikulin) who was in the same cabin. Gesha had to go to a place, stage a scene of fake falling on watermelon crust and traumatizing his arm and say the password «черт побери! (dammit!)» next to the pharmacy where he had to get a party of contraband diamonds and carry them inside gysum bandage. He walks with Semyon and then leaves him and runs to that street. And Semyon ran to look for him, but suddenly came to that street, fell on watermelon crusts, broke his arm and said the same password. And he got diamonds under bondage instead of Gesha…

This film is always shown in 31th December in Russian television. In many families it is a tradition to watch this old movie in New Year eve.

My friend Angelos even created a Russian Language course based on this film.

Evgeny(Zhenya) is going to propose a marriage to Galya, and celebrate the New Year with her in new flat. And in the New Year eve, he goes to banya with his friends according to their old tradition. Then they get drunk and go to see off their friend Pavlik to airport, however drunk friends by mistake put sleepy Zhenya to the airplane instead of Pavlik (in that time there was not such strict security in airport, so it was possible) and he flies to Leningrad (Saint-Petersburg now). When he wakes up in Leningrad’s airport, he orders taxi and requests a ride to his address. He comes to the address with the same street name as in Moscow, and opens the flat by the key from his flat in Moscow. Being still with hangover, Zhenya feels asleep there, and soon the beautiful woman Nadezhda comes home, she was going to spend the New Year with her fiancé…

There are many screen versions of this popular book. However, pay a special attention at this one. This is Soviet/Russian screen version of the story about Sherlok Holmes and Doctor Watson with Russian actors. In fact, one of the best screen versions. It contains 11 very interesting series. The series are followed by great sound track.

Kids are swimming in the Moskva river, and suddenly 12 years old Volka Kastylkov finds a closed bulb with a gene in river. Gene’s name is Gassan Abdurahmad Ibn Khottab, or just Khottabych, and he is trying to serve the child due to his gratitude for finding him.

Elderly Russian woman in Italian hospital tells with the last breath tells to her granddaughter that she belongs to rich aristocratic bloodline and when she fled Russia (i.e. after revolution), she left very big treasure, a total of 9 billion Italian lire in Leningrad (now Petersburg), “underneath the lion”, but didn’t mention under which one. Apart from the granddaughter, it was heard by the doctor, two male nurses a mafioso and a patient with injured leg. And then they all travel to Petersburg to find this treasury. And they are also joined by a Russian tour guide Andrey…